As I mentioned in my last article, I’m building a cloud-based MUD using all the modern techniques that I have available to me. One of the things I decided was that I was going to use an ASP.NET Core application hosting a single-page web application written in Blazor and I’m going to be running that inside a Docker image so I can deploy it onto Azure Container Apps. Scaffolding the app out is easy:

This opens up Visual Studio for me with three projects - a Client, a Server, and a Shared project - so far, so good.

If you want to learn more about the basics of Blazor, I recommend the following:

I have started working on getting my basic home page lit up, but I came across a small nit.

Ok - maybe “hate” is a strong word, but I avoid writing CSS as much as I can. I find it difficult to get CSS to do the things I want it to do without help. That’s where SASS comes in. SASS is completely compatible with CSS (so anything CSS can do, SASS can do better), has a large community, and is better suited for large projects. This isn’t a large project, but I’ll still benefit from its capabilities.

Of course, there is always a problem. It’s not supported “out of the box” in Visual Studio.

Web Compiler to the rescue

I have a few needs for SASS. Firstly, I need to be able to write SASS (or more correctly, .scss files) in Visual Studio and get all the help that Visual Studio is known for - syntax highlighting, snippets, etc. Ideally, I’d like to keep the SASS files separate from the other files so that I am messing with the wwwroot directory as little as possible. I should be able to build the SASS files into CSS files and have them auto populate the wwwroot directory. Finally, and most importantly, I need to be able to execute a build within a CI/CD platform without relying on Visual Studio and the existance of a specific setup.

That’s where Web Compiler comes in. Mads Kristensen is known for his excellent extensions. This particular one has been taken over by Jason Moore and the new one supports both Dart SASS (the reference implementation) and Node SASS (which lags behind in capabilities).

Open up Visual Studio and select Extensions > Manage Extensions. Enter Web Compiler in the search box, then press Enter. The Web Compiler 2022+ by Jason Moore is the first match. Install it just like you would any other extension (which probably involves restarting Visual Studio).

Once you are back in Visual Studio, open your Client project and create a new directory called Styles. No, this isn’t a special name - it’s just a name I picked. You can pick your own location. The point is that it is outside of the wwwroot. Right-click on the new folder and select Add, then find the SCSS Style Sheet (SASS) type and create a new style sheet. 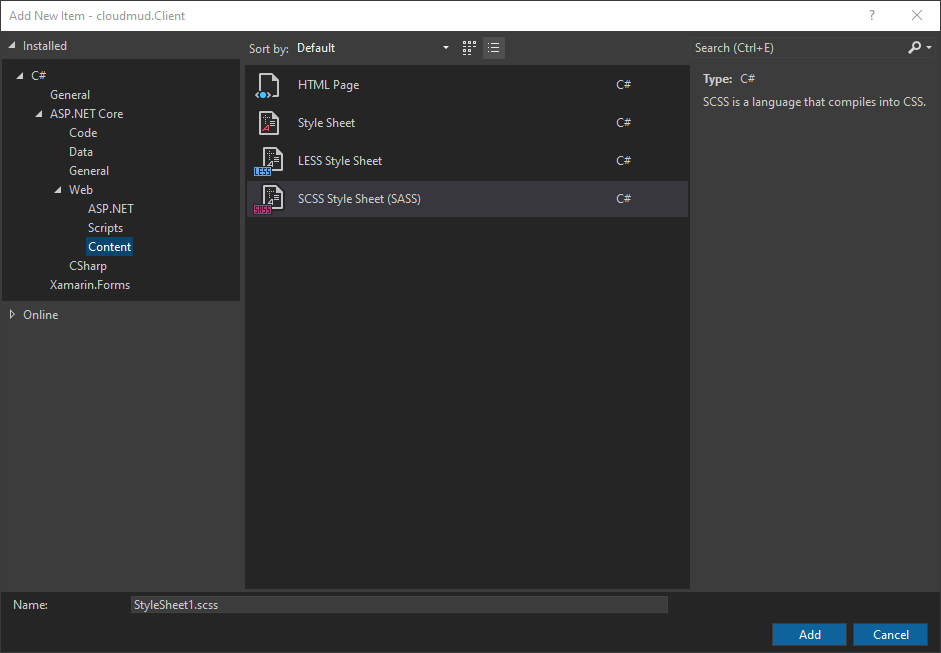 You can put whatever you want inside the style sheet - SASS has a lot to offer in terms of a pre-processor for your style sheets, so experiment. Let’s look at a basic setup that I tend to use. Firstly, I have a Theme.scss that includes a whole bunch of variables that I can use:

I have also moved (and re-formatted) the standard blazor UI stylesheet into Blazor.scss:

Just copy the data block from the wwwroot/css/app.css file - I’ve shortened it here for clarity. Note how SASS allows me to embed the sub-elements, which makes the SASS version of the stylesheet much easier to read. Now, let’s pull this together into the StyleSheet.scss file:

Now, compile the file by right-clicking on the StyleSheet.scss file, then selecting Web Compiler > Compile file.

This generates a StyleSheet.css file right in the Styles directory (which is the wrong place - we’ll fix that in a moment), and a compilerconfig.json (together with an embedded compilerconfig.json.defaults file) that is used to configure the Web Compiler extension. 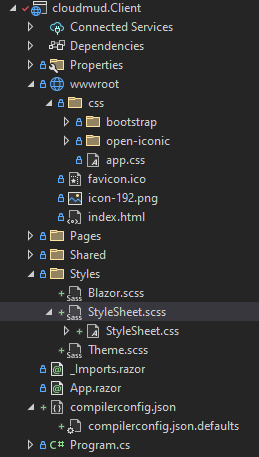 Take a look at the generated compilerconfig.json file:

It’s basically a list of objects with an input and output file. This is where I can adjust the location of the generated file. Set the outputFile to wwwroot/css/app.css and it will overwrite the existing CSS file that the project uses. I like to rename it at this point so I don’t overwrite the existing file. The only requirement is that the build file be placed in the wwwroot directory somewhere so that it is copied “as is” to the built site. If you rename the file, don’t forget to adjust the index.html file to load the style sheet from the new location.

Now you can right-click on the StyleSheet.scss file and select Web Compiler > Re-compile file, and the generated file will be placed in the right place.

Two versions of the CSS file get generated - a normal CSS file and a minified CSS file. You can load whichever you choose in the index.html file.

When you change ANY file in the project that is handled by the Web Compiler, then the Web Compiler runs again and re-generates the file. This includes .less, .scss, .styl, .jsx, .es6, and .coffee files. A recompilation is also done when the compilerconfig.json file is altered.

Take a look at the compilerconfig.json.defaults file. It contains all the settings that will be used to compile each type of file. I’m only interested in the SASS and minifiers at the moment, so I can remove the other sections. (I won’t because they don’t really affect things and I may need them later on).

The choice is yours. I prefer to set the defaults for all the files. The options that can be set in the SASS section are:

It’s a good idea to add *.css to a .gitignore file in the Styles directory. This prevents accidental check-ins of build artifacts. You may also consider adding a similar .gitignore to the wwwroot directory once you have integrated compilation into the build.

Everything above is really nice if (and only if) you are using Visual Studio. It doesn’t work on Linux, Macs, or if you are using Rider (as an example). It also won’t work when you are building the project in a CI/CD pipeline because Visual Studio is unlikely to have the extension installed when that happens. You are also requiring that other people who download the project and try to build it have the extension.

We need to integrate SASS compilation into the build step.

Fortunately, this is really easy. Right-click on the compilerconfig.json file and select Web Compiler > Enable compile on build….

This will prompt you to approve the addition of a NuGet package to the project:

Press Yes. Once done, the Client.csproj file will look like this:

Note the addition of the <PackageReference Include="BuildWebCompiler2022" Version="1.14.8" /> - this enables the build step. If you are on a Linux or Mac system, you can add this to your .csproj file for the same effect. Once you’ve done this change, delete the CSS files that were created in wwwroot and use Ctrl+B to build the client. Take a look at the output:

This shows the two files being built and they will appear back in the wwwroot directory. The same thing will happen when you build the project through a CI/CD pipeline, so now you don’t actually need Web Compiler installed to take advantage of the automatic build.

The only issue you will have is when you are using Hot Reload. When using Hot Reload, the SCSS build doesn’t happen automatically. You need to use the Web Compiler > Re-compile file command, then “force-refresh” the browser to make it load the style sheet again.

Once I have my main page looking nice (and that may take a couple of days - I think I mentioned I’m not good at this stuff!), I’m going to move onto authentication in Blazor.

Until the next time, happy hacking!

I work a lot with Azure API Management, which means I turn up and down services quite a few times a day. Azure API Management has an awesome feature that prevents you from accidentally deleting a service, called soft-delete. Instead of immediately deleting the service, it marks it as soft deleted and purges it later on. Unfortunately, that means that you can’t immediately reuse that service name. In production, this is a great thing to have. In development, it turns into a pain. That’s b...

As you may have guessed by now, I’m delving heavily into the world of Bicep right now, mostly in order to describe the infrastructure for my personal projects in a readable way. JSON and YAML (used by ARM) is most definitely not readable for the average consumer. Part of that work was learning about bicep modules, which I love for modularizing my code. However, there is one distinctive problem with this.

I’ve been playing around a lot with bicep recently. I like it because it is much more readable than ARM templates and lets me modularize my deployments easily. Recently, I was writing a module for creating named values in Azure API Management. Here is my service.bicep:

It’s a somewhat well-known facet of development that we don’t consider production problems until it is too late in the development cycle. When we look at taking a Web API into production, we use API management solutions to provide protection, control, and visibility into our APIs so that we ensure we don’t get woken up by a production outage. The things we need to consider are well understood in APIs in general, but what about GraphQL?