It’s been a while since I have worked on a React Native app. In that time, create-react-native-app (CRNA) has been deprecated, and expo-cli has taken its place as the advised route. There is still react-native init, and Infinite Red has ignite. That is four different ways of bootstrapping a React Native app.

Before I continue, let me be clear on what I want:

Let’s start with the obvious statement. All of the solutions for bootstrapping do the job that is proposed. It’s really a case of what opinions they have when you bootstrap a project.

Note that throughout this article, I’m going to use the term “emulator” to indicate both simulators (via XCode for iOS) and emulators (via Android Studio for Android).

Naturally, I took to Twitter to start the investigation:

So CRNA is dead, @expo CLI is new, but requires you to sign up. How do folks like to bootstrap a @ReactNative app now?

It looks like a horse race between react-native init and expo-cli! After experiencing all of them, I can see why this is the case.

When you install the development environment for React Native, you probably installed this:

That’s it for setup. Now, how about bootstrapping?

Here, RNIApp is the name of the directory (and the app) that I am developing. When done, here is what the layout looks like: 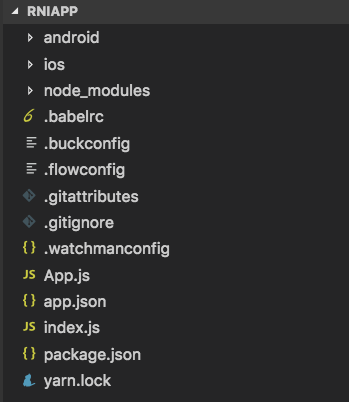 There are minimal opinions here and all are easily changeable:

I would use react-native init if I was planning on adding a library that isn’t supported in Expo. (AWS Amplify - one of my go to libraries for connecting to the AWS cloud - is supported by Expo).

My next one to try was the expo-cli. This is the replacement for create-react-native-app (or CRNA). CRNA was maintained by the community and had no ties to another organization. Now that Expo has taken it over, they’ve got ties for publishing Expo apps and building on their backend. These are all, in the whole, good things. You don’t need to sign up for an Expo account if you aren’t using these things. That means if you were using CRNA, just use expo-cli instead and you won’t lose functionality.

Installing the expo-cli is as easy as all the others:

Then you can easily initialize a project:

This gives you a choice. Do you want a minimal setup (which is much like the CRNA option) or a better setup with tabs and react-navigation. I opted for the minimal setup to see what that looks like first: 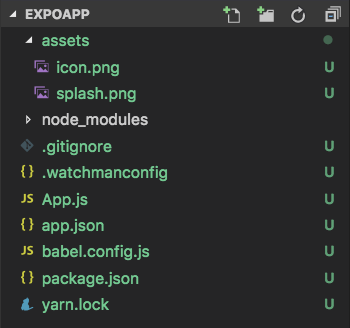 In the minimal configuration, there is very little opinion:

This template adds @expo/samples as a dependency, which has no GitHub repository (so I can’t check out the source code prior to downloading) and no README. I had to go and check out what was in it in the node_modules directory. It’s not a particularly big nor important dependency, but the lack of transparency is disturbing. Other than this glaring point, it also adds react-navigation, which is fairly standard as the screen navigation solution.

I’m sure there are good reasons for all of this, and I trust that the react-native version will be kept up to date. Still, this is causing me more investigation to ensure I know what I am playing with.

In terms of “time” that will be saved in bootstrapping, the tabs template will save about a days worth of development time, but the blank template won’t save anything.

New (to me) is ignite by Infinite Red. Installing this is as easy as the others:

Then initialize the app:

The ignition process also asks you about which libraries you want to use, with (in general) only one supported, so you get to include it or not. After all is done (and it takes a long time), this is what the file structure looks like:

Pre-installed dependencies (not including the libraries that you asked for during the ignition process) include:

That’s a lot of boiler plate. In addition, a lot of the structure of the app is taken care of for you.

So, what will I use?

I’m a believer in understanding what goes into the code you write. As a result of that, I prefer to not use templates that do a lot. I might use the tabs template from expo-cli, but that would be as much template as I would want.

I’m more likely to look at react-native init or expo-cli with the blank template.

In terms of my debugging, etc. situation, relying on expo early on seems like a good idea. However, I have concerns (which I should probably just get over) as to that react-native library stored on GitHub. That being said, I can always eject from the expo version and revert to react-native init form. As a result of all that, I’m going to go with the expo-cli version.