In addition, I likely need to store my own profile information. One of the capabilities I want, for example, is the ability to follow a user. In this case, I’ll need to store additional information that isn’t available from the social media provider that is providing the basic information.

In short, I need a service in the cloud to store this sort of information.

Here is how it will work:

Registration is done in two steps. First, the app displays a page asking for name and email address. This is submitted with the social media token to /api/register. The backend will store the data with a state=PENDING, then send the user (via email) a code. Finally, a response (200 Success) is returned with the data. When the user gets the code, they put it into the app, which sends it to /api/register?code=XXXXXX. This is validated, and then a 200 Success with a JWT is returned. The app can then move to the main app.

There are various error conditions to be programmed as well:

So far, so good. What about the architecture of the backend? There are several ways to implement the backend API within Azure. You need to decide on language, framework, and technologies. There are a lot of decisions that are made during this process that are based on: 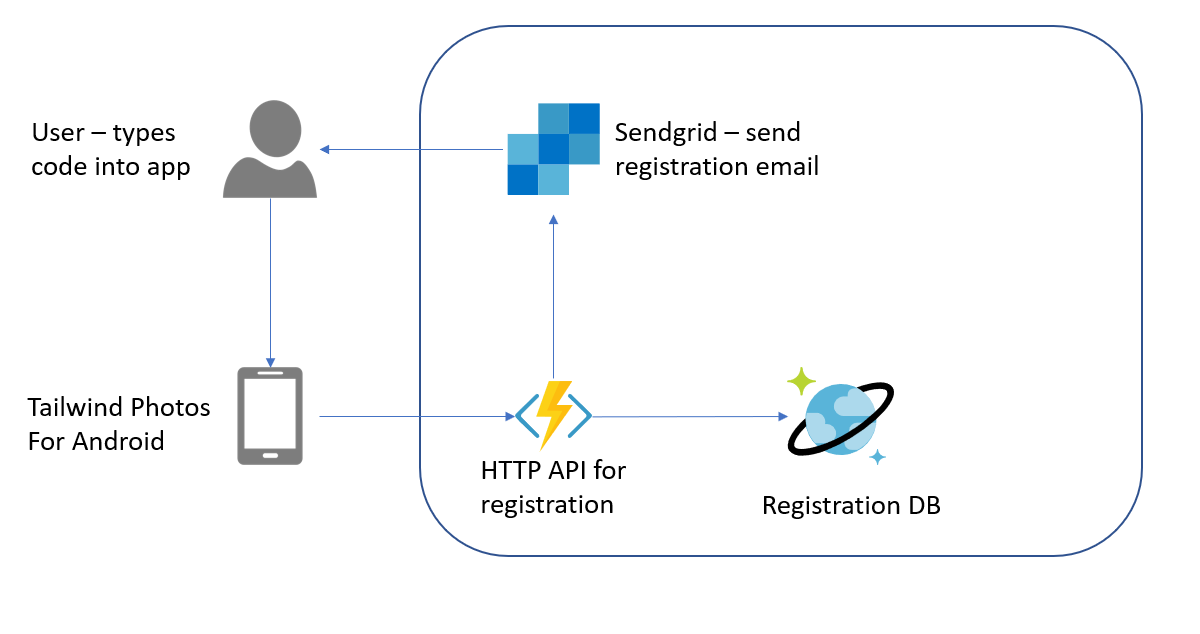 Of course, I want repeatable deployments, so everything is going to be deployed via Azure Resource Manager (or ARM). This involves writing an ARM template (which I pretty much always write based on a template, but I’ll go through the basics here), and then running a deployment script using the Azure CLI.

Let’s say I have a prefix called twprod. I’d want the following resources:

An ARM template is a JSON formatted file called azuredeploy.json. I’m going to put it in its own repository, but you can combine this stuff in the repository for the app if you like. Since I want to also do an iOS version of the app, I think separating it is a good idea.

An ARM template has four sections:

After that, it’s a fill-in-the-blanks process.

I don’t like to use too many parameters. These are passed in from outside, so they need to be specified exactly the same each time. It’s better to adjust the template since then you have it under source control rather than relying on the whim of the person deploying the template. Here are mine:

Let’s move on to variables. This is where you can construct the names of all the resources based on a prefix. I also like to put the options that are available to the resources here.

Variables are computed, which means there are operators (called functions) - like concatenation (which is the one I use most often). For a list of operators, see the documentation.

The next step is to add the resources to the template. You can search the ARM quickstart repository for templates for individual resources. However, putting them together is your job. Let’s go through each one in turn:

Storage is the easiest to do since it’s pretty much at the bottom of the heap for the architecture. It has no dependencies.

You are probably wondering how on earth you would figure this out without examples. I did too. First of all, there is a reference for ARM. This also has references for each resource. You can take a look at the Storage resource as an example. This gives you, among other things, an example template, a list of property values and what the properties mean. You should bookmark the reference if you are doing ARM development.

Cosmos is a complex NoSQL database that has multiple facets. Each facet corresponds to a method for accessing the data. You can choose from MongoDB, SQL, Cassandra, and so on. You have to decide on the facet during deployment. It can’t be changed later. To deploy a CosmosDB, you need to create a database account:

This one has some required properties, so consult the documentation to see the available properties. The most notable one you may want to tweak is the default consistency level.

App Insights is called “insights” when looking for the resource definition:

Azure Functions requires a special linkage, so make sure you use this recipe whenever you are using a function app.

SendGrid is one of those useful resources that I turn to time and again for sending out emails:

Note that all the services defined thus far don’t have dependencies. The Azure Resource Manager can create these in parallel.

Talking of which, here is the function app:

All the app settings become environment variables for your code to read, so you really want them to be easily understood. This is an opportunity for you to inform your function app (a collection of functions) where your other resources are located. A lot of these app settings are constructed at this time so that the function can easily digest the contents.

Now that we’ve got a completed deployment script, we can deploy it to a new resource group. I’m using the Azure CLI for this. First, login:

Then create a resource group:

Remember that all the resources are going to be located in the same region unless you specify otherwise. The default region is the location of the resource group. Let’s kick off a deployment:

I’m putting maximum logging here as it’s helpful to identify issues with your template that prevent it from even being submitted. You’ll get an error message showing the offending code. At that point, it’s best to review the code and compare to the documentation.

You will see the resources as they are created. If any resource fails, look at the Operation details to see what is wrong. For instance, here was my first run of the deployment:

Let’s take a look at the errors. First, the one for Sendgrid:

Again, this was an error in the template. I was using the wrong API version. I needed to use API version 2018-05-01-preview. Once I had corrected those two issues, I can run the same deployment script again. The Azure Resource Manager will figure out what needs to be changed and only deploy the bits needed to be changed.

Finally, there was a wrinkle in the Sendgrid deployment. I needed to accept the terms for the marketplace. In fact, the error was very specific:

First, connect your account using Connect-AzureRmAccount. This is the equivalent of az login on the Azure CLI side. Then accept the terms with the following:

Finally, I was able to get a good deployment! Make sure you also check out the outputs. This is available in the deployment screen or from the output of the az group deployment command.

However, this deployment has just deployed the resources. I have not configured the database, nor have I deployed any code. That’s for next time! Also, I’ve not given you the parameters file :-) I specify the prefix and password for production in an azure-parameters.json file. This looks something like the following:

This is not checked into the repository since it stores my secrets. However, I can deploy easily enough with the following command:

Next time, I’ll cover the initial code for generating the registration and show off how to deploy the code to a function app. In the interim, check out the new repository with my code in it.